Indefinite detention without due process

I'm a lousy prognosticator and the fact I'm posting this shouldn't be taken by anyone as carrying any more weight of validity that it would coming from anyone else who hasn't demonstrated a long, successful history of predicting events.

But from my severely limited perspective the actions of the US Congress relative to the near-unanimous passage of NDAA in both houses, followed by the signing by the president during the last hours of 2011 represent a clear statement of intent.  The provisions for using the US Army for rounding up and detaining 'suspected terrorists' wouldn't, I believe, have passed with such enthusiasm if the government didn't intend to use them.

There's no clear definition of what constitutes a 'suspected terrorist', no due process, no habeus corpus rights, no right for legal representation by the detainee.  There's no way of knowing who might be the intended target for this, nor is there any indication as to whether they have groups targeted already.  I might end up being rebel-rousers in the ghetto, might be Tea Partiers, might be Occupy movement folks, might be Militia groups, or might eventually be Rainbow Family.  Because there's no hint of why they felt an urgency to pass this into law, there's no valid way to apply reasoning to identifying potential targets.

But whether a person chooses to allow it to influence personal behavior is an entirely individual decision better arrived at while knowing such a thing now exists.  It is a reality.

...i just started thinking what that meant also-...not only do we have absolutely no rights it also insures that no Gov't officials can be held responsible for false imprisonment!

Tai:  From your and my positions in the Universe I'm not sure it's valid to suggest they could ever have been held responsible for anything.  It's been a longish while since anyone in the government gave any indication they wanted any help deciding whether one of their brothers-in-spirit needed to be held responsible on anything at all.

Maybe if a person looks at it from the right direction this will actually be a means of clearing out the cobwebs of illusion we've built around how we believe things work in the world and the Universe, what's important to us, as individuals, and where we might get the most growth focusing our attention and energies.  No matter how many times an individual's made the circuit of our star there's always a temptation to allow our energies to point to empty gestures we feel more important for making than on substantive matters we can actually influence.

Looked at from just the right direction this might actually be, at worst, neutral, and quite possibly a blessing of sorts.  Thanks for the reply.  Old Jules

I hear ya, Old Jules- i like what you said-

"" No matter how many times an individual's made the circuit of our star there's always a temptation to allow our energies to point to empty gestures we feel more important for making than on substantive matters we can actually influence.""

...being part of the human condition- (& maybe we're hiding behind that catch phrase to some degree also- i'm guilty of empty gestures too- almost like an unhealthy psychological pattern i get caught up in or un-consciously fuel like an addiction- ""cobwebs of illusion""

I appreciate your care in stating perceptions about this dangerous new law. It does appear vague in setting out just who will be held, in contradiction to rights spelled out in the Bill of Rights. I kind of doubt that they intend to hold any Corporate persons, now that Corporations are held to be persons.

Joking aside, it would appear that if ever used in the draconian ways we fear, it would not survive a Constitutional challenge (except under the present Supreme Court) But it would take a long time to get there.

Why so many elected reresentatives chose to vote for this, desite widespread public opposition, we can only speculate.

Meanwhile there is a statement Obama made, when signing it, that may shed light, or may further obscure the issue. In it he says, "Moving forward, my Administration will interpret and implement the provisions described below in a manner that best preserves the flexibility on which our safety depends and upholds the values on which this country was founded.”

A link is below:

On perhaps a reassuring note, (but i don't seem to feel much better) Obaba says,

"I want to clarify that my Administration will not authorize the indefinite military detention without trial of American citizens. Indeed, I believe that doing so would break with our most important traditions and values as a Nation. My Administration will interpret section 1021 in a manner that ensures that any detention it authorizes complies with the Constitution, the laws of war, and all other applicable law.”

Thanks for the reply, Michael.  A couple of weeks previously he said he wouldn't sign it at all.  I don't suppose I put a lot of weight on what any of them say, so much as what they do.  In this instance they did the one thing and the thing they did speaks with the volume and bass knobs turned up all the way, while what they say is more on the order of background noise.

Seems to me the important issue in making individual choices of interpretation rests on the side of what they did, as opposed to what they said about what they did.  The action is on the books, hard and fast.  The words about it can shift around any way they want to without having anything to do with the action done.

But I've been accused with some accuracy of expecting politicians to perform in accordance with what they are and why they choose to be politicians [as defined in observations by their political enemies].   In that sense they almost always live up to expectations.

However, if a person finds it reassuring I've no investment in trying to convince them otherwise.  Someone's got to be out there sticking his head up to see which way the wind's blowing.

Seems to me you've summed it all up nicely brothers.

All I can say to that is amen.

...so the anchor has been cast- in a sense- and i agree -action's set in motion- and sealed like this- the dance of the words is just a fluff factor as the power has been suggested & the sad reality for possible innocent victims caught in the crossfire intentionally or not- i could see them using this to indefinitely detain Occupy activists- , but I'm hoping  the budget will be limited to serious threats - how do you Folks feel about this recent Fall 2011 Graffiti i snapped this in Asheville, NC- the Occupy movement is fairly steady & organized there - with dedicated task specialists reporting to others on updates and and such- towards the end of my 3 month stay in Asheville, Late October and Eary to Mid-November- the LOcal Police were trumping up petty insinuated charges against many activists and even a few bystanders- many arrests were made~! 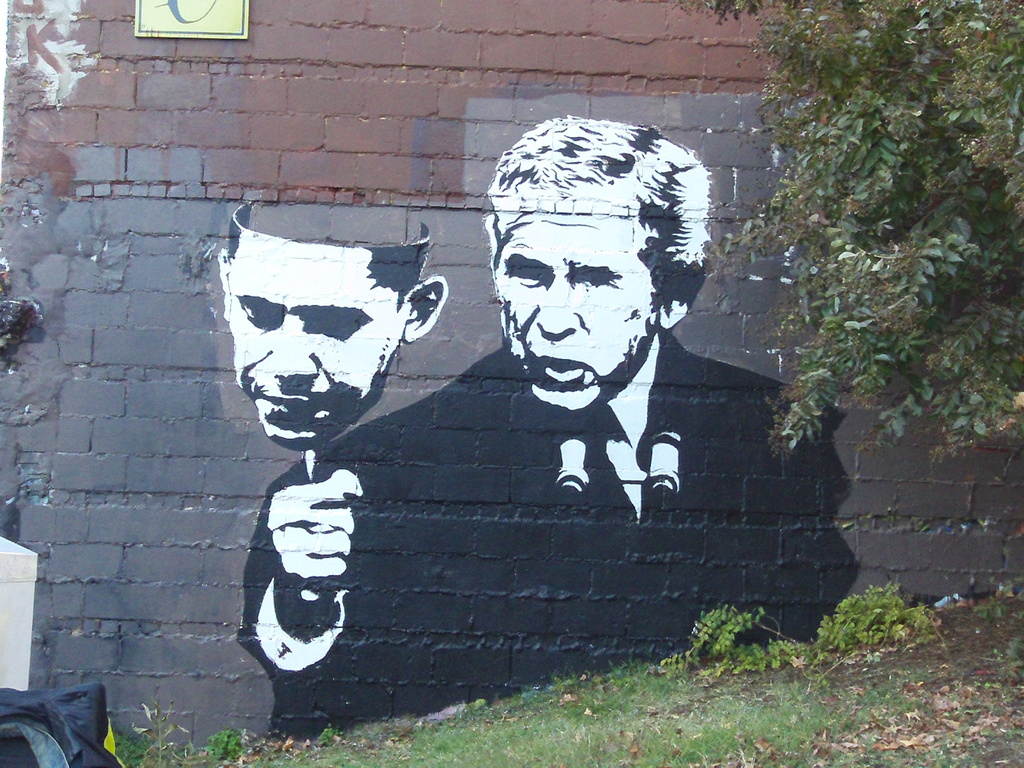 Tai:  Nice pic and it says a lot I resonate with.  Though the guy holding a mask has someone behind him holding his, I suspect.  As for who gets targeted, I don't think events have progressed far enough to discount the possibility for some surprises.  There are blogs all over the web with guys on the other end of the political spectrum waving their guns around yelling, "Come in and get me coppers!"  For that matter, I've a feeling the real power won't remain enamored with the Tea Party folks once they don't need them anymore.  Poor relations who complain a lot mightn't be a joy to have in town.  IMO.  Jules

So you've noticed those gun-waving self-defined targets (i want to say fools, but i try not to judge without walking the mile, and I have no intention of wearing those shoes). I've heard some call it cleaning the shallow end of the gene pool.

Morgan:  A person's not likely to drown wading around anywhere  in the human gene pool, thinks I.  The proof's in the fact we all take ourselves so seriously and we're all so 'right' and so able to know so completely when others aren't.  IMO.  My particular gene pool should have died of thirst back during the last ice age.

For example, here's all this Mayan Elders business tipping its hat to a people made a daily passtime of ripping the still-beating hearts out of their peers and kinfolks, calling it a virtue.  And their offspring many-times-removed explaining how their world-views are leading us into utopia.

Those gun nuts can't top that, in my view, though it doesn't raise the water level.

Permalink Reply by Star Albright on January 6, 2012 at 6:53am
The other night I was visiting one of my daughters, and watched for the first time the movie V. For Vendetta. This movie is a "fictional" story about a totalitarian regime that stifles all disent and both imprisons and kills its own citizens to maintain its iron grip on the general population. One of the two heros is the Bio warfare victim gone wrong( from the governments perspective); and coincidently the character who popularized the Guy Fawlkes mask. After his demise for standing up to the powers of oppression, the "good cop" says to the other hero, "Who was he". Her response was " He was all of us"

Cat Riversong liked little wing's discussion These are Rainbow RAPS memes, designed to teach and celebrate Rainbow Ways both online and at Gatherings, by inspiring Rainbows to bring RAP Boards to Gatherings.
Jan 14

I was not in attendance at the most recent gathering 2020 in Idaho, nor in counsels on the ground, so I'm not sure the exact wording of the current invitation but here is one consented upon in the past. The First Invitation to the Rainbow Gathering We, who are brothers & sisters, children of God, families of life on earth, friends of nature & of all people, children of humankind calling ourselves Rainbow Family Tribe, humbly invite:All races, peoples, tribes, communes, men, women,…See More
Jan 13
0 Comments 1 Like