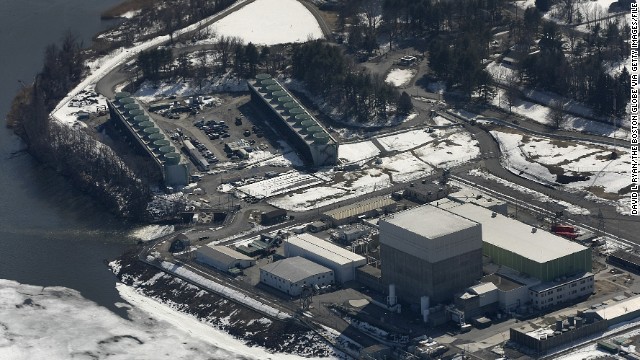 "This shutdown decision was made because this asset is not financially viable," owner Entergy Nuclear Vermont Yankee LCC said in a statement.

The 40-year-old plant, which employs 630 workers, is in Windham County on the Connecticut River, near the border with Massachusetts.

During decommissioning, a process that could take decades to complete, fuel will be transferred to storage, Entergy said.

The plant's boiling water reactor, made by General Electric, uses river water as a cooling source and is licensed to operate through 2032.

Vermont Yankee had been the subject of a battle between state authorities and the Nuclear Regulatory Commission over its GE-designed containment housing known as the Mark 1, one of 23 such reactor housings in the United States.

That was the design used at Japan's Fukushima Daiichi nuclear power plant, where three reactors melted down after the station was struck by the tsunami that followed an earthquake in March 2011. The disaster resulted in the widespread release of radioactive contamination that forced more than 100,000 people from their homes.

Japan fed up with 'whack-a-mole' approach to Fukushima

The Nuclear Regulatory Commission rejected a petition by anti-nuclear groups to shut reactors using the GE Mark I containment.

Japan will need decades to clean up after Fukushima Daiichi, the world's worst nuclear accident since Chernobyl in 1986.

The U.S. nuclear industry hasn't built a new reactor since the 1970s. But on February 9, the commission approved two new reactors at the Vogtle nuclear plant in Georgia. The reactors differ from those at the GE plants at Fukushima Daiichi and in the United States.

National Energy Institute President and CEO Marvin Fertel called the closure "a great loss to the state of Vermont, the regional economy and consumers and the environment."

But the Vermont plant's finances have dimmed in recent years, as widespread drilling for shale gas has lowered the price of natural gas.

A 2008 post that is still on Entergy's website predicted that "the continued operation will result in over $2 billion in additional income for the residents of Windham County and the state of Vermont as well as increased tax revenues for the state in excess of $300 million in today's (2008) dollars."

At the time, Vermont Yankee was supplying nearly a third of the electricity used in the state.

But the company said Tuesday that it had spent more than $400 million in operating costs since 2002.

"The announcement today by Entergy that it will shutter the troubled Vermont Yankee reactor is the latest -- but certainly not the last -- domino to fall for the failing U.S. nuclear power industry," said Mark Cooper, a senior fellow for economic analysis at the Institute for Energy and the Environment at Vermont Law School.

He noted that Tuesday's announcement follows the August 1 announcement by Duke Energy that it is abandoning its reactor project in Levy County, Florida, and that the French-subsidized nuclear giant EDF was pulling out of the U.S. nuclear power market "due to the inability of nuclear power to compete with alternatives and the dramatic reduction in demand growth caused by increasing efficiency of electricity consuming devices."

He cited the recent closures of four other nuclear reactors: two at San Onofre in California and one each at Kewaunee in Wisconsin and Crystal River in Florida.

"What we are seeing today is nothing less than the rapid-fire downsizing of nuclear power in the United States," he wrote. "It is important to recognize that the tough times the U.S. nuclear power industry faces today are only going to get worse."

i was considering attending the VT regional aug 1-10- but this bothers me- i worry more so, because it's the same model reactor at Fukushima - and it's 40 years old~!  maybe the truth is found between the lines- maybe they fabricated the cover story of being financially un-able to compete with the natural gas alternatives to mask a disaster scenario being hushed by he U.S. Government to dis-courage panic and mass exodus evacuation?

I hope my paranoid what if's are completely irrelevant and un-substantiated. One things for certain- no matter what state you live in- there are many nuclear power plants and buried spent fuel containment regions that many are not even aware of.   I took Potassium Iodide in 2011 when Fukushima went down- and I'm glad I protected my thyroid- no one else in my family would take it- I also went vegan to avoid the milk and meat in my diet.

...interestingly enough- here is a link to another article by a different reporter- and there is a contradiction- this article states that there was a successful legal action implemented that refused to issue a new 20 year contract for the Yankee Nuclear Power plant in VT; whereas the 1st article I posted states the Yankee Nuclear Power Plant has already been in operation for 40 years. So- who's correct?

Shutting them down should benefit the environment immensely if they can successfully contain the spent fuel/rods etc and have no accidents while transporting the radioactive materials to storage, but with the current economical crisis I worry the safety standards will be low and who's going to be monitoring this progress and make sure no short cuts are being taken?

...well as long as we're talking facts- here's a list of Nuclear Accidents in the United States I found interesting- I wish we had NEVER implemented nuclear power reactors in the first place. Glad  modern alternatives are ending the production cycle, but now we still have to live with the fallout of previous accidents and any forthcoming from the existing plants and spent fuel/rods.

...at the end of the list- i found this one about VT


How much tritium leaked from Vermont Yankee before the leak was stopped?

A good friend asked me the title question for this blog during the week. The question intrigued me enough to encourage some digging and computations. I would be interested in any questions that you have about the assumptions.

Based on reading a number of different articles and checking through the tables provided by the Vermont Department of Health, the fluid that was leaking into the ground contained tritium at a concentration of approximately 2.5 million picocuries per liter. That is equal to 2.5 x 10^-6 curies per liter. The rate that it was leaving the pipe was roughly 100 gallons (370 liters) per day. If the leak had been going on for a year before being detected and stopped, the total quantity of fluid that left the pipe would equal 138,000 liters. The total activity released would be 0.35 curies.

If a single person consumed every drop of that water, their whole body radiation dose would equal roughly 30 rem. According to a 1977 UNSCEAR study, the LD-50 (lethal dose for 50% of the populatio.... For the kind of low energy beta emissions that are produced by tritium, a rem is equal to a Rad. A dose of 30 rem received over a 1 year period would be unlikely to cause any immediate health effects, though it might add an additional risk of developing cancer sometime during the person’s life. The magnitude of that risk could be computed using the conservative linear, no-threshold dose assumption.

Of course, a person who tried to drink 378 liters per day for a year would have problems more immediate the possibility of increasing their lifetime risk of cancer.

I also was asked to put this discharge into some kind of perspective, so I decided to compare it to the allowable and measured releases from a well operated and safe CANDU reactor in Ontario. Pickering B has a Derived Release Limit (DRL) for tritium of 490,00.... That is 4.9 x 10^17 Bq or 13 million curies. Here is how the Canadian regulators determine the DRL for a facility:

The CNSC sets the limit for the radiation dose for the public arising from the activities of nuclear facilities at 1 mSv per year. In addition, to minimize the environmental impact of tritium releases, the CNSC uses the ALARA principle, which means that licensees are required to keep exposures “As Low as Reasonably Achievable”.

All authorized releases to the environment – known as Derived Release Limits (DRLs) – are calculated using a methodology that considers the various ways in which radionuclides, such as tritium, can impact members of the public.

For instance, the methodology must take into account the impact of tritium releases on locally-grown food, water supply and air quality. The methodology used is conservative and assumes, for instance, that individuals live, work and stay in their community for extended periods of time.

DRLs are specific to each facility, and take into account various regional factors such as meteorological and geographical conditions, as well as the population density near the facility.

Through careful management and application of ALARA (as low as reasonably achievable) actions, the plant managed to keep its releases in 2008 to just 200 TBq or 5,400 curies, just 0.04% of its allowed limit. At that rate, Pickering B released almost 15 curies per day, about 40 times as many curies as Vermont Yankee’s infamous leak released in an entire year.

Now can you see why I so strongly believe that the protesters and politicians in Vermont have been stirring up a tempest over a shot glass sized swirl? As one of my mentors used to say – no sense reacting if you cannot overreact.

Peace, Love, and Harmony to the Earth and her Children- We need to learn from the past and that means figuring out what really went down and how not to let it happen again so everyone can heal- including the Earth and we can continue to evolve into the New Age of Environmental Responsibility without corrupting our original DNA/gene pool.

There is any gathering soon in India?Or maybe a community that I can visit?Or someone that wants to go to hitchhiking adventure together?See More
Jan 13
0 Comments 0 Likes

For everybody who enjoy the nature spirit and love.. for the healers and those in need of natural/spiritual healing.. for  everybody  from the world but also for the Brothers & sisters of Europe.. the ones who loves pagan culture rooted in the Celtic folklore, a bit of the Glastonbury vibes.. come and gather & communicate here.. love to you ..See More
Jan 12
0 Comments 0 Likes